This happens to be my second book on the Holocaust / 2nd World War. Fairly early on you have an idea how the book will end, but still as I was reading the ending I could NOT believe it was happening. I was totally engrossed in it like I haven’t with too many books.

The other thing about the book – unlike most other books, this makes me NOT want to watch the movie. At least not right now. Maybe later, much later.

After I finished reading the book, I knew I could never watch the movie. 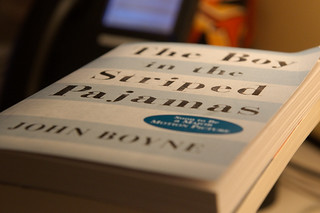